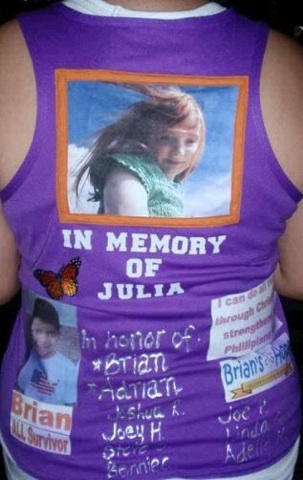 When my oldest son was in first grade, he introduced to me, through his stories, a girl in his class named Julia. I had the opportunity to see her briefly at an Open House early in the school year. Fiery red hair and a gorgeous smile, Julia lit up the room. It was easy to see why he was so enchanted by her.

I learned a few months later that Julia had become very sick with aplastic anemia. I followed her mom, Jenny, on Facebook, as she documented Julia’s progress. Her story soon became one that I felt so involved in and was so touched by. Jenny would post pictures of Julia, and in every picture, her smile illuminated the camera and I couldn’t help but smile too. In respect of Julia and her family, I won’t go into the details of her treatment, but we were all incredibly sad when Julia passed on November 27, 2009. I know it was my son’s very first heartbreak. Jenny and I became good friends, and it wasn’t hard to see where Julia got her infectious smile and fun personality.

I joined Team in Training in 2010. At the time, I had only been running for 5 months, and my longest distance had been 5 miles. At the urging of my cousin and TNT Coach, I decided that I would train for and run a full marathon, and even though I had known and been touched by other people who had fought different diseases, Julia was the one who I ran for. Her favorite color was orange, so I tied an orange ribbon on my training shoes. When training became difficult, when I thought I couldn’t take one more step, I would look down at my orange ribbon, and found the strength to keep going. By the time the 2011 LA Marathon came around, that orange ribbon was frayed and brown – but it was the greatest momento I ever had because it meant one thing – courage.

Jenny helped me sew a picture of Julia onto the back of my race jersey framed with orange trimming. It was a gorgeous picture and the framing matched Julia’s hair. I found it so appropriate that the color featured in every advertisement for the marathon was orange.

Marathon day came and it was what I imagine a marathon nightmare to be. Torrential downpours made running all the more difficult, as my shoes were soaked and I felt like I was running in combat boots. I was about 10 degrees away from hypothermia, hungry and miserable. As I ran up yet another hill, I thought about quitting. No one would blame me, I figured. It was at that moment that a woman ran up behind me. “Is that your daughter?” she asked, pointing to my back. “No,” I replied. “That’s Julia; she was my friend’s daughter. I’m running in her honor.” “She’s beautiful,” the lady replied. It was that moment that everything was put into perspective. It wasn’t about ME. It was about a little girl who had given everything she had and didn’t stop. It was about her mom, a woman I had grown respect, a woman who was the greatest fighter I had ever known and who never, ever quit. I was running for a purpose and I had to keep going. For Julia.

As I crossed the finish line, my tears were lost in the pouring rain. And around my neck was a shiny medal hanging from a bright, orange ribbon.