One Medal for Mom and Dad 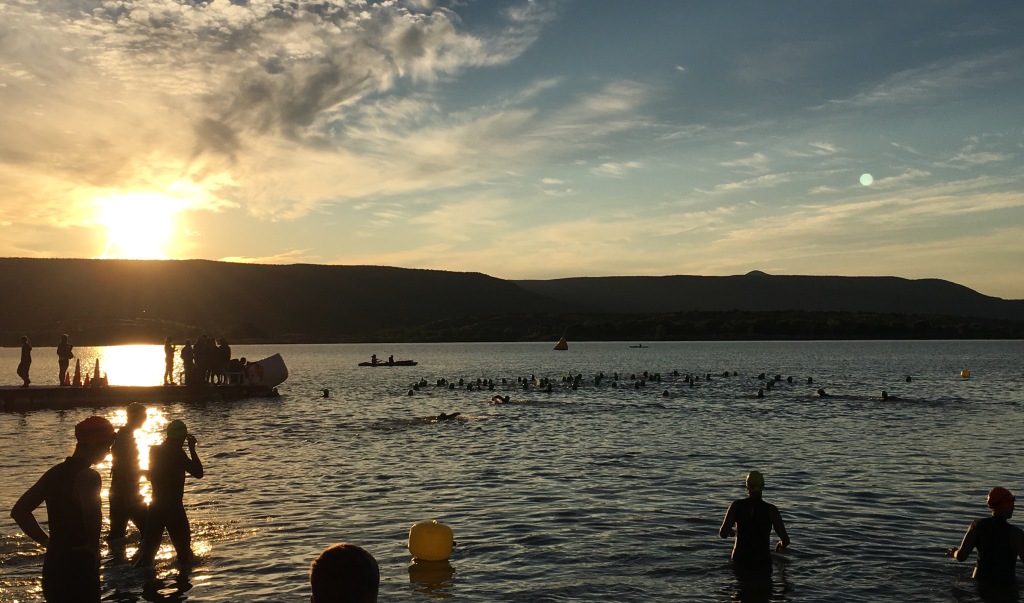 The road to my first Ironman and half-ironman distance are dedicated to my mom and dad, respectively. Both mom and dad are great role models for my brother, sister and me.

The first of the races, the 2016 New Mexico Toughman Triathlon, is dedicated to my dad. He is a toughman, a survivor. In college he earned a swimming scholarship to Notre Dame. Later in life he survived a small plane crash and learned to walk again. He has had parts of his foot cut off (and reattached), survived a fusiform aneurism and has never lost his sense of humor.

The 2016 Ironman Wisconsin (#IMWI) Ironman seemed to be fitting to dedicate to my “Ironmom”. The foundation for our family, she remains CEO of the Garrity Family. Organizing, planning, engaging and caring for all of her children, even the favorite one.

Ok, kidding, there is no favorite. It is a long running joke amongst the siblings.

When the Toughman competition unfolded in August 2016, I went into the race feeling confident with the 54+ mile bike ride and 13+ mile run. The swim was what captivated my anxiety.

There were two waves of swimmers; men followed by women/relay teams. In my mind, this meant I was surely going to be passed. And that was ok, I knew my swimming prowess was significantly impacted by two right shoulder surgeries that I never properly rehabilitated.

My plan on the swim was to sit back and let the field spread out ahead of me. That approach seemed to work well for me right from the start when I saw a pod of faster swimmers get off course in advance of the first swim. At one point, I sat up in the water, looking at the lead group, and noticed the lead swimmer was going a little more to the left then he really needed on the rectangular clockwise course. I just swam, the lead group and lead females and relay teams all eventually caught up.

The bike course, which I’d ridden before with friends, was a challenge that was made palatable by the amazing scenery of Cochiti, New Mexico.

The run course, was a bit more challenging. And very hilly. Along the way, friends and teammates from my Black Dog Triathlon team cheered me on and provided encouragement. Run

ning the race for my dad, I honored him by wearing a Notre Dame shirt that read “Play like a champion today.” Those words are the last things football players see before entering onto the gridiron.

The finish felt good, mission accomplished. I soaked in the achievement for a day or two, feeling confident about the next race in less than four weeks.

The atmosphere of the Ironman is very different than that of the Toughman. Like the difference between Major League Baseball and the minor leagues. The professionalism and very buttoned up atmosphere of the Ironman brand is reinforced through signage, shirts, organization and its army of volunteers. The signature of every event is the event’s founder Mike Reilly announcing to the world “(Enter a name here) You Are an IRONMAN!” It is quite exciting to hear your name announced in a venue like that.

For 2016 Wisconsin Ironman, I was racing through a charity entry with Team Worldvision. Raising funds so the people of Africa can have access to clean water. The morning of the race, our team was grouped together. The nervous tension could be cut with a knife. We gathered together for prayer and a word of encouragement. As we were wrapping up, Mike Reilly suddenly appeared over my shoulder and told our group “Team Worldvision, today, each of you will be

an IRONMAN.” Talk about hitting the emotional baseball out of the park!

While I won’t go over every aspect of the race, chapter and verse. Here are some of the highlights.

The swim was a mass start. That’s right. There were 2,000 “Type A” personalities who were poised to launch with a cannon blast. My strategy, to start swimming ten seconds after the canon blast was smart for two reasons: 1) I wasn’t caught up in the flailing of bodies and a cluster duck of a start (FYI a cluster duck is a very messed up duck). I caught a draft from the 1,800 swimmers ahead of me and quickly caught up on the first turn, where it is customary to “moo” like a cow as you wait your turn to get through the first left on the counterclockwise course. The rest of the swim was what I anticipated, swimming on the inside part of the course and adjusting my stroke to keep from getting clocked by kicking feet and falling fists. Exiting the water, I totally nailed my goal time of 1 hour 30 minutes.

I will not type of what I witnessed in the transition areas. If you would like to know, buy me a beer, or two. Be sure it is a Russian Imperial Stout.

mile bike ride was a challenge. I was grateful for The Bike Fitter who provided some keen insights on how to train for the #IMWI course. The early September air was cool for the start and temperate for the bike segment. The key highlights was hitting 47.5 miles per hour on the downhill segment and remaining on my bike throughout the course, even while going up Barlow Road (a killer of a hill where many participants dismounted).

Starting the final segment, a 26.2 mile run composed of two loops, I felt good and even helped to carry a filled water jug for Team Worldvision (that effort took a lot of energy). The course included two trips around the University of Wisconsin football field. I had to chuckle abut running on their field given the history between the Badgers and my beloved TCU Horned Frogs.

The run was clearly my strong suit, passing a number of runners. Each person was running for a reason that was communicated in what they were wearing, carrying or saying. It was motivating to see committed athletes who knew they just wanted to finish the race.

The sun going down and infamous State Street emptying out, the air temperature dropped fast. There was buzz around the water stops to try the chicken soup. No going on 12 hours of motion and living off of a strange concoction of tailwind, gu, bananas and some well intended breakfast burritos, my stomach churned at the prospect of introducing “broth” into the caldr

on.   However, after hearing some good reports, I decided to stomach some of the concoction and… it was… THE BEST THING EVER! Like Manna from Heaven, this chicken broth had the salt, substance and hot temperature to give my body a lift and add a little kick in my step for the final miles.

It is important to give a shout out to my cousin, who had been providing support throughout the course. Chris had finished three Wisconsin Ironman competitions and was a huge support on the course.

The last 250 yards of race were among my favorite. All of the runners enter into a chute that winds through a gauntlet of well wishers before finishing through Ironman’s version of the Arch de Triumph.

Soaking up the moment, I gave high-fives to the well-wishers and heard the words as I approached the finish “From Albuquerque, New Mexico, Tom Garrity, today, you are an Ironman!” I was adorned with a mylar blanket a green hat and a finishers medal featuring an animated dairy cow.

After the race, finishers are guided to have a picture taken and to get some food and drink. I asked only for chocolate milk and was chagrined to find that no milk product was available due to sponsorships. This, despite the official logo and event signage featured a dairy cow! I choked down some cold pizza, savored a Coca-Cola chair and rested in the silence of knowing I am an Ironman.